Yet again sleep eluded me. Got about 3 hours. Today is supposed to be one of the harder ones. It’s longer than most and has quite a bit of uphill – but compared to other hikes it’s fairly tame. 26km/16 miles and 500m/1600ft of up.

Left at 7.45am, and stopped at a cafe recommended by the Residencial owner. A quick coffee, but more importantly a takeaway ham and cheese roll. Lunch is sorted.

On the way out of town (Odemira) spotted a Rota Vincentina mural. Picture needed… obviously. 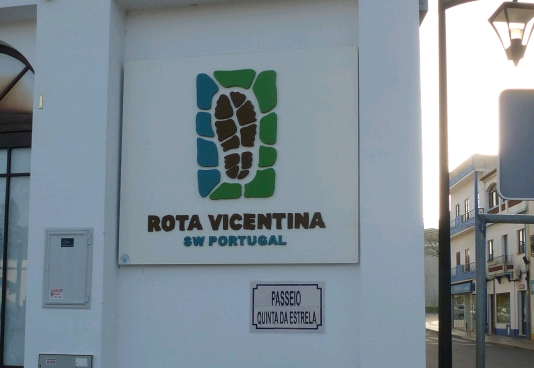 Today’s walk was mainly through rural landscapes, skirting the edge of the forest, and often following rivers. Temperature far more reasonable today. As expected, mid to high teens most of the day, peaking around 21 or 22degC.

A bit of a rollercoaster hike, but generally more up than down. 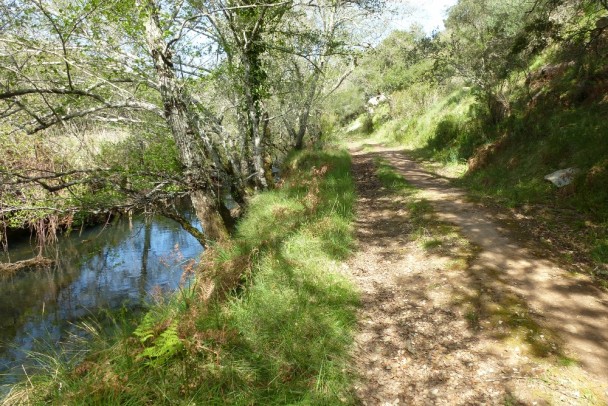 Managed to spot some wildlife…finally. A small lizard.

Have seen plenty of wild-nolife over the last few days. Mostly flattened on the tracks: mice, a rat, frogs, lizards, a mole, 2 small snakes.

Found today hard work. The track was mainly very compacted mud/gravel. Very hard on the feet. Socks have also lost their loft, so not much padding. Sore feet by the end. And the return of chafing! Feel tired.

Being a Sunday, also had to compete with trials bikes and cyclists on the track. That said they were all very courteous – said hello and thanks when I got out of the way.

I said it was rural. Do you ever get the feeling you are being watched? 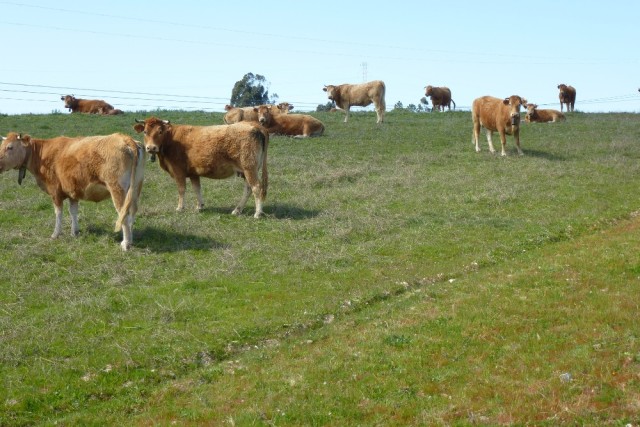 Got to Sao Luis about 3.10pm. As usual no camping spots. Just as I arrived a group of 4 hikers piled out of a taxi (cheating!!) and went to check-in at the hotel in town. I tried to follow suit, but the woman there couldn’t cope with the idea that I hadn’t booked.

Took 3 phone calls before finally the owner spoke to me and confirmed they weren’t full. 35euros. Job done. This hotel does, however, win the TV award. Choice of 1 channel! I suspect they have a master, and whatever channel that TV is on is the one everyone gets to watch.

This route (Historic Trail) is definitely not the tourist route. Didn’t meet any hikers on trail at all today. I prefer this more genuine experience, though can be quite hard work using the universal language of “point and nod”. And it is a bit unnerving when you go into a bar and everyone stares at you! Another issue is that cash rules – even the hotels and restaurants don’t take plastic. Tonight’s restaurant helpfully had a note on the bar. “Cash only and the cash machine at the bank is broken”.

Found out the 4 hikers are going the same direction as me, so I have booked tomorrow (Monday) night (25 euros), and Wednesday night (30 euros), so they don’t steal all the rooms! Tuesday night is camping for me. They will have to arrange a taxi to pick them up and take them to a hotel somewhere.

Anyway, to finish, we have the obligatory flower